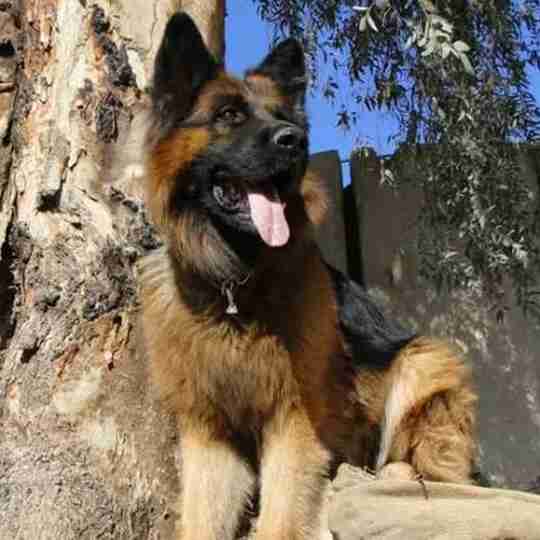 Formal Schooling and Certifications: K-9 Big Fuzz attended initial training in Moyock, NC at the Department of State Training Academy. He had been certified by the U.S. State Department, The North American Police Working Dog Association and with the State of Texas.

Career Stats: K-9 Big Fuzz worked in Iraq protecting United States dignitaries and embassy personnel to include the U.S. Ambassador from 2006 – 2010 without ever leaving the country until he retired from the U.S. Department of State. Once back in the United States, Big Fuzz continued to work as a dual purpose patrol and explosive detection dog surrounding the Austin, Texas area from 2010 – 2014. Big Fuzz worked many of the University of Texas Football games in Austin and other major events. Big Fuzz also responded to numerous bomb threats throughout the region until he finally retired in 2014 due to losing his mobility, eye sight and vision.

K-9 Big Fuzz was imported from Europe and was trained North Carolina until he subsequently deployed to Iraq in 2006. It is estimated that Big Fuzz conducted over 1100 missions in Iraq for the U.S. Department of State, Department of Defense and the Central Intelligence Agency prior to his return to the United States in 2010.

In addition to being able to find bombs, Big Fuzz had the incredible ability to alert his handler just seconds before a mortar or rocket attack was about to hit the area. A story which has been featured in two university text books used for teaching a master’s course in

security management. Big Fuzz survived dozens of attacks by Al-Qaeda during his tenor in Iraq, and it is believed that he could hear the whistle of the projectile in the air when it was launched and he would run to his handler and lay at his feet and whine to alert them of the incoming round.

The years of the bright sun and loud explosions ultimately did Big Fuzz in during his senior years and that is when Project K9 Hero stepped in to assist him with his retirement and medical costs. By the time Big Fuzz was 13 years of age he could no longer hear or see, and he suffered a mild stroke a few days before his 14 the birthday (Christmas Day). Big Fuzz hung on to life until he turned 14 but his medical condition was too much for him to overcome and he passed away on December 26th , 2016, a day after his last birthday.

Project K-9 Hero was honored to pay for the cremation services for Big Fuzz for his loyal and faithful service to our country both domestically and abroad. Project K-9 Hero also paid for an engraved urn and a custom portrait of Big Fuzz to remembered by, through donations made to our organization. This helps us ensure that Big Fuzz will never be forgotten by those he served.