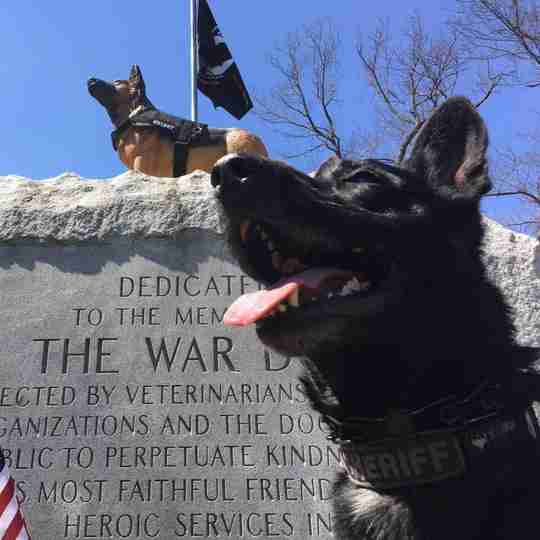 Career Stats: NAPCH 2010 Detector Dog of the Year; Recipient of the NAPCH 2016 Life Saving Award and a Life-Saving Award from OCSO

K-9 Blitz started his full-time service with OCSO in May 2011, quickly having several apprehensions and high profile cases. On one of his first deployments, he tracked a subject that fled from a stolen vehicle that was being chased and crashed in a city neighborhood. Blitz tracked several city blocks, down streets, and back alleys, where he eventually found the subject hiding in the back room of a local store.

In June 2011, Blitz assisted Homeland security in sniffing a suspicious airplane that landed at a local airport. Blitz indicated to the odor of narcotics and over 350 pounds of marijuana and thousands of dollars in cash was located inside the plane. Blitz was named the NAPCH 2010 Detector Dog of the year for this case. In August 2011, Blitz assisted a DEA Crew with a traffic stop of an individual being investigated. Blitz indicated to the odor of narcotics on the vehicle and eventually on juice and cereal boxes inside the vehicle. Two kilos of cocaine were found concealed in those boxes, in addition to what was being delivered to undercover officers. A search warrant for the residence was obtained and Blitz further indicated to the odor of narcotics on several boxes inside. There were over 80 kilos of heroin and 10 kilos of cocaine located in the boxes. There was also over $650,00.00 in cellophane-wrapped cash found in boxes near to the drugs.

In December 2016, Blitz had the best find of his career! An elderly person had walked off from their residence at least a couple of hours before being discovered missing in frigid, below zero, temperatures. The missing person had left the house with one shoe and was not dressed for the frigid temperatures. Ten different agencies from the surrounding area had already responded to assist with searching the area on foot and in vehicles before a call was made for a K-9 to assist. Blitz started a track from an article of clothing and quickly found scent. Blitz tracked a couple of hundred yards and found the missing person in a neighbor's yard, laying in the snow. Blitz located the person in a backyard, out of view, and suffering from the elements. Blitz received the NAPCH 2016 Life Saving Award and also a Life-Saving Award from OCSO, for this call for service.

Blitz has been deployed on calls for service thousands of times for the OCSO and other local agencies. He has tracked and found, or caught, many other individuals that fled from Officers or crime scenes throughout his career.

While Blitz has had many successful apprehensions and finds, he was also part of countless community events and demonstrations, showing the importance of well trained K-9’s assisting in police work. He has been part of honoring K-9 Heroes at the Michigan War Dog Memorial every year since the first War Dog Memorial Day Ceremony in 2011. Blitz also has a special bond with his second handler, Stephen “Strong,” a young K-9 handler in training, ironically fighting his own battle with Neuroblastoma. Blitz has been involved with Stephen during his treatments, recovery, and training as a future K-9 handler. 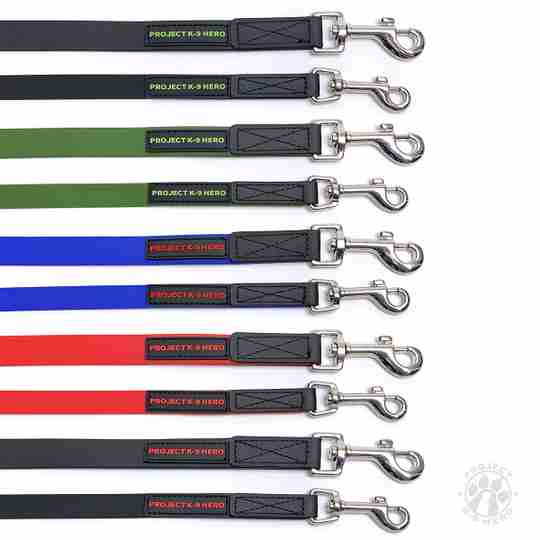 For a $28 donation, we will send you a large “Project K-9 Hero Dog Lead” in your choice of five color combos. The lead features a comfort grip handle thanks to the foam-lined interior and a high-quality gunmetal grey bolt snap for easy collar attachment. Walk your dog in style and support a cause whose purpose is to ensure the best quality of life for our nation’s retired Military Working Dogs and Police K-9 Heroes.

MAKE A DONATION, GET A LEASH
Use left/right arrows to navigate the slideshow or swipe left/right if using a mobile device
x
x