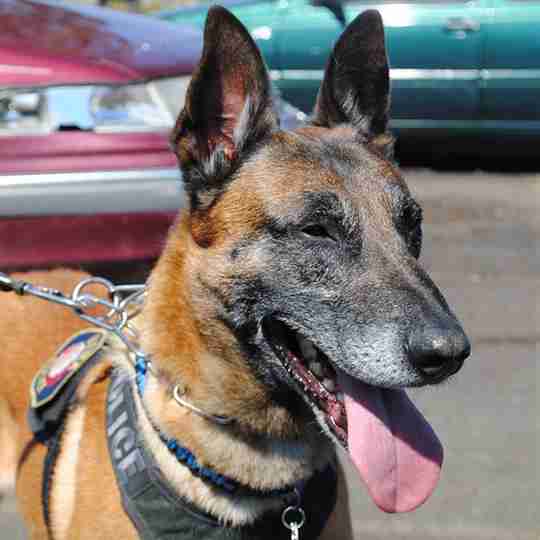 Formal Schooling and Certifications: K-9 Kazan attended the K9 Global Training Academy for eight weeks in narcotics detection. He moved to Washington State in July of 2006 with his handler and was certified in narcotics detection in August 2006 by the Washington State Police Canine Association. In 2009, Kazan began annual certification with the Pacific Northwest Police Detection Dog Association, where he maintained a 100% find ratio until his retirement.

Career Stats: K-9 Kazan had over 2,000 deployments in his career, resulting in over 1,500 narcotic related finds.

Kazan worked his entire career at the Yakima Police Department in Yakima, Washington from 2006 to 2013. During that time, Kazan worked in the Patrol Division, assisted local and Federal drug task forces, and local and county agencies with narcotics detection. Kazan also took part in local bus interdiction, where he alerted to large loads of narcotics. Kazan became very popular on the presentation circuit, giving annual presentations for the Chamber of Commerce’s Leadership Yakima course, many of the elementary and middle schools, awareness fund raisers, and business groups.

Kazan was not the typical crazy Malinois. He possessed a very friendly demeanor around adults and children, making it easy to give off-lead presentations. Unfortunately, Kazan was very dog aggressive towards male dogs. This made it almost impossible for a group K-9 photo. However, he made exceptions for females, so he and K-9 Flash were able to take photos and play off-lead together.

After Kazan retired in 2013, he spent his remaining years with Kevin and his wife. He grew close to Kevin’s wife as she could now take him for walks. On July 25th , 2017, Kazan suffered a seizure that no medicine would stop. Veterinarian Ken Lust contacted our Founder, Jason Johnson, about Kazan’s condition. Jason arranged for Project K-9 Hero to pay for Kazan’s vet bills, cremation, and a surprise painting of Kazan.